Yoga is a wonderful practice since it may help alleviate stress, boost your mood, and enhance your physical health. And Rishikesh in India being the world yoga capital attracts multitudes of yoga aspirants every year. That’s the reason why the 100 hour yoga teacher training and 200 hour yoga teacher training in Rishikesh at AlakhYog have become the most common certifications applied by yoga aspirants here these days. And, when you add core power yoga to the learning practices, the benefits of these programs go much beyond the simple physical rewards.

Yoga Core Power Exercise is a set of yoga practices meant to help you create a deeper, stronger, more flexible and more balanced Yogic Body. Multidisciplinary in nature, it is also more exacting. In order to cultivate inner power, it teaches people how to interact with their bodies and connect with their spiritual cores through movement. With this inner power, students can employ their mental and physical strength in order to keep up with yoga’s demanding practices.

Corepower Yoga – History And Advantages Of The Practice

There are some who consider Core power yoga to be an updated version of Ashtanga yoga, which is why it’s also called as Power Vinyasa. “Core power yoga” was coined by Ashtanga Yoga instructor Beryl Bender Birch, who was influenced by Sri K. Pattabhi Jois, an internationally recognised Sanskrit scholar who shared his knowledge and views on Ashtanga Yoga in his manner.

People who were inspired by Sri K. Pattabhi Jois, a prominent Sanskrit scholar who shared his expertise and philosophy on Ashtanga yoga, carried the practice over to the West and began it. When Western yogis began teaching this style of yoga, they began calling it core power yoga.

Let’s have a look at some of the benefits of learning yoga corepower exercises.

Detoxification of the body

Core Power yoga helps the body rid itself of harmful poisons in a more comprehensive way. Internal organs such as the kidneys, liver, and lungs work harder to remove toxic elements from the body, keeping the internal temperature at an ideal level. Energy levels soar and skin is cleansed, hair grows better with gloss and hormones remain stable.

You’re going to get hot and bothered during each session, what with all the exertion. As you gain experience, your body adapts to sweating more quickly than it did previously. The toxins are flushed out of the body through sweating. Some people believe they have had a decent workout if they are completely drenched in perspiration after doing yoga of this style. Your heart will have to work harder to cool you down when you work out with a lot of vigour. This facilitates blood flow and increases the heart’s performance. Strengthening your heart muscles is a byproduct of working out harder, which causes your body to produce more perspiration. There’s no need for any further exercise.

The mind’s ability to strengthen memory and mental attention will be improved with this Core power yoga’s breathing practises. It boosts one’s self-esteem and self-discipline, which in turn helps one carry out daily tasks more confidently.

With better circulation and more frequent sweating, the body’s immune system will have plenty of reasons to bolster itself. Your white blood cells will be boosted as a result, which will aid in boosting your immunity.

You’ll work harder in yoga class and burn more calories if you do exercises to strengthen your core. Core power yoga helps to improve lean muscular mass in addition to burning more calories in the body. This aids in the prevention of obesity and other weight-related problems by reducing excess body weight.

Most people in today’s fast-paced society are frequently stressed or nervous. This depletes the body’s energy by keeping it in a constant state of mental and physical stress. When the body isn’t getting enough exercise, tension builds up in the muscles and breathing becomes limited. A feeling of exhaustion sets in, and you may begin to feel sick as a result. This is where core power yoga comes in.

Yoga core power is a multi-disciplinary style of yoga, now also a large part of Yoga Schools in Rishikesh. It incorporates a variety of styles and disciplines all aiming to improve flexibility, strength, and aerobic activity. Power yoga, core yoga, and hot yoga all have a place in this hybrid form.

Power yoga became popular in the West because it focused on the physical aspects of yoga rather than the spiritual and meditative. Power yoga is a style of yoga in which poses are performed in quick succession without necessarily adhering to any predetermined sequence of stretches and poses, as is customary in Ashtanga yoga.

When people hear “core yoga,” they picture a style of yoga that emphasises weightlifting and core power. While partly accurate, core yoga also uses techniques like Kundalini Core Yoga. The primary distinction between core yoga and core strength training is that the former emphasises breath as the source of inner strength.

Some of the yoga schools in Rishikesh like AlakhYog that teach core power yoga include hot yoga in their programs. Some yogis who teach core power yoga feel that adding heat can reduce the danger of muscle injury and help with detoxification. The option of practising in a non-heated room is ideal if you want to practise core strength yoga but prefer more basic beginner yoga programs.

Including Yoga Core Power workout into your regular exercise routine will do wonders for your entire fitness routine. Because it includes exercises for growing lean muscle mass as one of its three primary programs, every yoga school in India aspires to incorporate it as part of the regular practice of yoga, a divine art form. 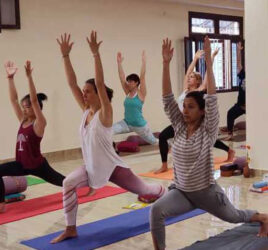 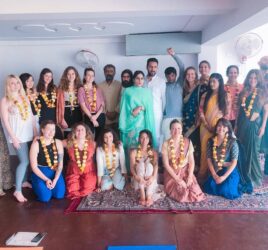 What are Dosha and Prakriti?